The HYDE family have been involved in the Irish drinks business for over twelve generations since 1640. HYDE is presidential quality Irish whiskey named in honour of Ireland’s very first president Douglas Hyde. President HYDE was an inspirational figure who helped to define Ireland’s national identity.

At HYDE we carefully hand select only the very finest Irish whiskey, made by only the very best Irish whiskey distilleries, which we then finish in vintage oak casks which we source directly from distilleries and bodegas around the world. HYDE premium Irish whiskey is bottled in small limited edition batches and non-chill filtered for a more original character. We apply specific charring levels to our vintage oak casks in order to create a whiskey that is rich in character and truly unique in taste.

AT HYDE OUR MANTRA IS ‘ IT’S ALL ABOUT THE WOOD’ .

Douglas Hyde was the first President of Ireland from 1938-1945. He was sworn into office on 26th June 1938, which was the very first presidential ceremony in Ireland’s long and rich history.

President Hyde was an inspirational figure who helped to define Ireland’s national identity. As an academic he played a fundamental role in cataloguing Ireland’s rich cultural history and championing the Irish language.

HYDE is presidential quality Irish whiskey which is named in honour of Ireland’s very first president Douglas Hyde. HYDE is a celebration of Ireland’s unique history, heritage and provenance.

The years on each of the HYDE expressions are significant dates in Irish history that are directly associated with President Douglas Hyde: 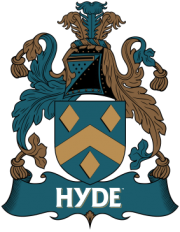 The HYDE family have a long tradition of being involved in the drink business in Ireland.

The HYDE’s were well known bar owners at ‘Tinker’s Cross’ just outside Bandon in West Cork, from 1640 to 1962. Here the Hyde’s would sell fine Irish whiskey and draught Stout straight from wooden oak casks that they would tap with a wooden mallet and a brass tap.

This same HYDE Bar was also the HYDE Blacksmith’s forge for over 300 years. The HYDE family were Vintners here for over ten generations. HYDE’s bar was famous for always having some of the finest bonded Irish whiskey in West Cork.

Today Conor Hyde is the first generation of Hyde’s not to own a pub in West Cork, Ireland, but he continues the HYDE reputation for bonding and purveying some of Ireland’s finest Irish whiskey.

At HYDE we are proud to be purveyors and curators of some of Ireland’s finest Irish whiskey.

Independent ageing and finishing of great Irish whiskey in bonded warehouses is a well respected tradition which dates back hundreds of years since the 19th Century in both Ireland and Scotland.

In fact in the 1800’s every county in Ireland had its own uniquely tasting local independent whiskey brand, aged in a local bonded warehouses, with the whiskey being sourced from independent Irish distilleries.

DENMARK - HYDE is whiskey of the month on shelf fo